COVID-19 Update: Our staff has a strict code of sanitation in place to ensure everyone’s safety and wellness.

Click here to see what is required of you at your appointment.

Some of the most common refractive errors are: 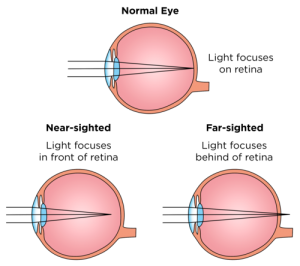 Myopia is also known as nearsightedness. This is a condition in which near objects are visibly clear, but distance objects appear blurry. This eye condition is a common genetic trait and can generally be corrected with glasses, contacts or surgery, such as LASIK.

Hyperopia, or farsightedness is the eye condition which causes near objects to be blurry. Although squinting helps, it is best corrected with glasses, contacts or surgery, such as LASIK. 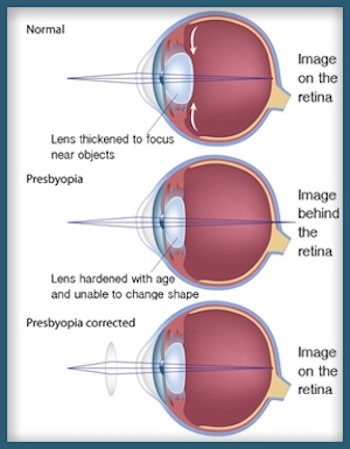 Presbyopia is the gradual, age-related loss of near vision due to a decrease of focusing ability. Presbyopia generally becomes noticeable around age 43 and worsens with time. Holding objects at arms length helps in a pinch, but it is best corrected with prescription glasses, over-the-counter readers or certain contact lenses. 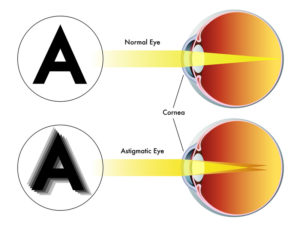 Astigmatism is an eye condition in which one’s cornea is curved asymmetrically. This irregular curvature causes blurred vision at any distance. Astigmatism often coupled with other visual conditions, such as those previously discussed. Like other refractive errors, treatment is generally glasses, contacts or in some cases, surgery.

You can schedule your next eye exam with us online!